Markets were mildly up last week as investors departed from the previous week's selling. Europe was skittish and Asian markets continued in the same direction as the week before with Chinese equities down slightly and Japanese stocks up nearly 2% (NIKKEI 225). Turning to the U.S., the Dow Jones Industrial Average was down 0.2% while the S&P 500 and NASDAQ Composite were both up 0.28% and 1.1%, respectively. There were a few important news items that hit last week and we wanted to highlight the ones we felt were the most important below.

The market eagerly awaited the Federal Reserve's minutes from April which offer a peak into how members of one of the world's largest central banks view the economy. According to the release, Fed officials generally dropped much of the rhetoric around their concerns over slowing global growth and cited the positive improvements in the U.S. labor market, leaving the door open for a rate increase in June. More specifically, Federal Reserve officials generally agreed that risks to the economy from "global economic and financial developments had receded over the inter-meeting period.” Overall, it appeared that Federal Reserve officials were giving themselves room to raise rates in the coming months without committing to a specific interest rate path. 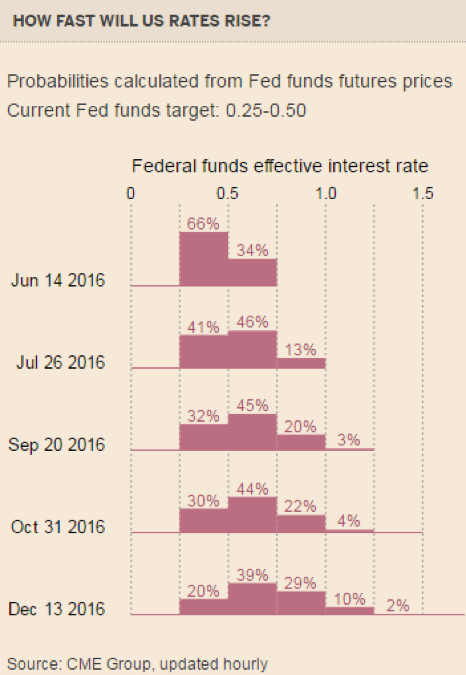 The U.S. Labor Department announced last week that the Consumer Price Index (CPI) rose 0.4% for the month of April, marking a 1.1% year-over-year increase. This is the biggest monthly jump since February 2013 as gas prices drove the lion's share of growth. Gas prices were up 8.1% over the last month while both food and housing costs were up 0.2% and 0.3%, respectively, over the same time period. The Federal Reserve has remained very public about their 2% inflation target and, while the headline CPI reading came in at 1.1% year-over-year, the Federal Reserve's own measure of inflation is running at 1.6%. April's strong retail sales growth and inflation contrasts with the slowing payroll expansion and spike in unemployment, sending mixed messages on the direction of the economy. We would reiterate that the markets still don't expect the Federal Reserve to raise rates before September given the mixed economic data over the first four months of the year but, as we mentioned above, the central bank is open to moving in June. 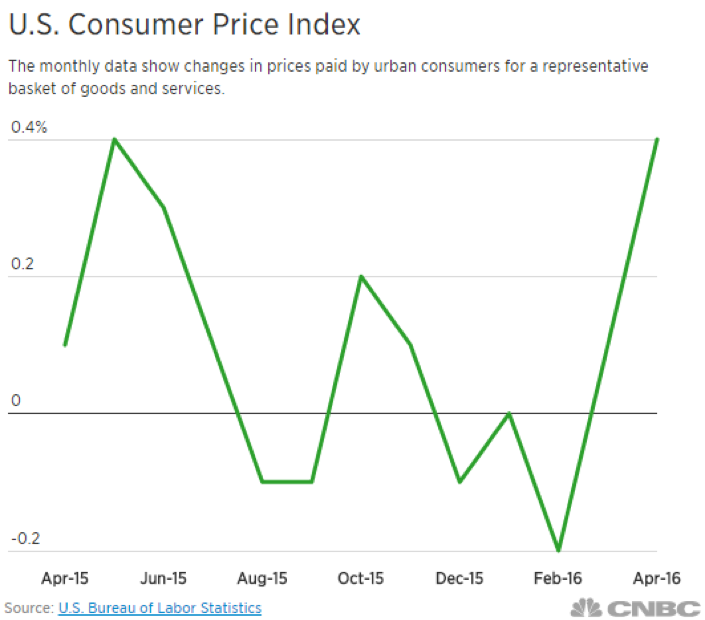 According to the preliminary data, U.S. companies ramped up their share buybacks over the first quarter of 2016 as the downturn in the market provided opportunities to buy their undervalued shares. Indeed, the average price per stock was down almost 5% lower than the fourth quarter of 2015, leading to an increase in repurchases of 20% over the same period and 31% more than a year ago. Of the companies that bought back their shares, Apple, General Electric, McDonald's and Boeing repurchased the most. Share buybacks are an attractive way for companies to return capital to shareholders without taking on the commitment that increasing or instating dividends typically entails. The data is still pending but the estimates are that companies spent just over $142 billion in the first quarter of 2016 on share buyback programs with the record at $172 billion in the third quarter of 2007.

What were you doing when you were 15? Learning to drive? Well, a Canadian teenager named William Gadoury may have discovered a lost Mayan city using nothing but constellations and Google Maps. Up until now, no one has thought to map the locations of the Mayan cities to stars but when he did, he noticed the biggest Mayan cities matched up with the brightest stars in various constellations. William studied 22 different constellations and was able to map 117 Mayan cities throughout Mexico, Honduras and El Salvador but one didn't show up on the map. After taking his findings to the Canadian Space Agency, the organization agreed to focus their satellites on the region and the images came back showing what appears to be remnants of a manmade structure right where he said it would be. Experts have yet to review his research but the approach is novel and promising. Somewhat complicating the matter is the fact that the find isn't going to be easy to reach. It is in some of the most remote stretches of the Yucatan Peninsula in Mexico, but William intends to one day visit his discovery.

Content in this material is for general information only and not intended to provide specific advice or recommendations for any individual. All performance referenced is historical and is no guarantee of future results. All indices are unmanaged and may not be invested into directly. This newsletter was written and prepared by CWM, LLC.