Last week was a telling reminder of how addicted to easy money equity markets have become. A relatively uneventful week turned south quickly when a better than anticipated U.S. jobs report shifted expectations of a Fed rate hike to sooner rather than later. The S&P 500 collapsed 1.6% for the week while the Dow dropped 1.5%, and the Nasdaq composite fell 0.7%. Despite the pullback, one group of constituents remains bullish on U.S. equities: corporations. During the month of February, there were more than $118 billion of buyback authorizations, up 48% from February 2014. We are only two months into the year, but the current run rate puts corporate treasurers on pace to repurchase approximately $915 billion of stocks during 2015. This would be the largest amount ever, surpassing the $863 billion retired in 2007.

Everything Old is New Again

Last Monday, the Nasdaq Composite closed above 5,000 before retreating for the remainder of the week. This is the first time this index has returned to this level since the tech wreck fifteen years ago. Eclipsing this watermark no doubt raises anxiety, but today’s index is very different that it was back in 2000. First, it is much more profitable as a whole. According to Ned Davis research, only 68 of the top 100 Nasdaq companies were profitable in 2000; today 90% are. Secondly, at 21 times earnings, the P/E is almost a third of what it was during the previous peak, and now it produces a dividend yield of over 1% compared to essentially nothing fifteen years ago. Lastly, it is also important to remember that when adjusted for inflation, the index is still nearly 30% lower in real terms. 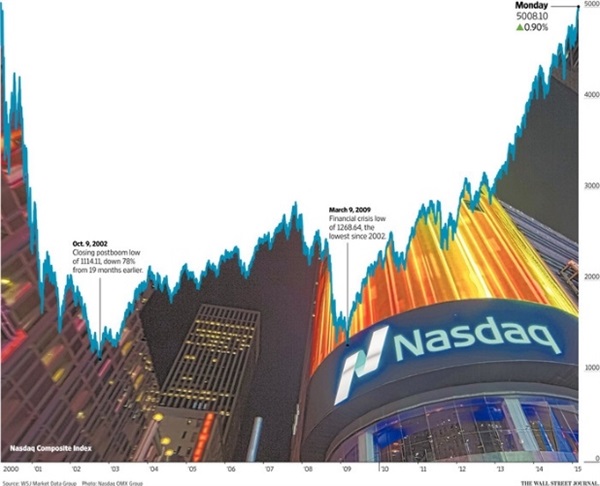 China unveiled its 2015 economic growth forecast last week, and the 7% figure would become the lowest level of expansion in nearly 25 years. This comes on the heels of the 7.4% rise experienced in 2014 that was just below the official government target. 2014 was the first time in more than fifteen years economic growth fell short of the government goal. The lower forecast signals that politicians are willing to take the dramatic steps necessary for structural reforms at the expense of near-term growth. This is a bit of a reversal from late 2014 when the People’s Bank of China cut interest rates to spur the slowing economy. China is walking a razor’s edge when it comes to economic progress. Anything much slower than 7% is not enough to maintain unemployment at 4.5%, and more important political stability. However, juicing growth beyond this requires more debt-driven infrastructure investment that is not sustainable and could come crashing down at a moment’s notice. 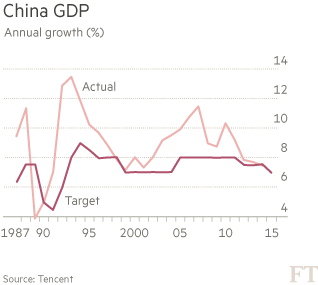 On Friday, the Bureau of Labor Statistics reported the U.S. economy added 295,000 jobs in February. This figure crushed the consensus estimate of 235,000, and extended the streak of 200,000 new jobs or more to twelve months. The unemployment rate fell to 5.5%, the lowest figure since May 2008. However, January payrolls were revised down to just 239,000 from 257,000 and wages remain soft. Wage growth was just 2% year-over-year, a slight deceleration from January’s expansion of 2.2%. The report sank stocks on Friday but buoyed the U.S. Dollar’s strength against the Euro/Dollar exchange rate closer to parity at 1.08. This is the weakest level since 2004. 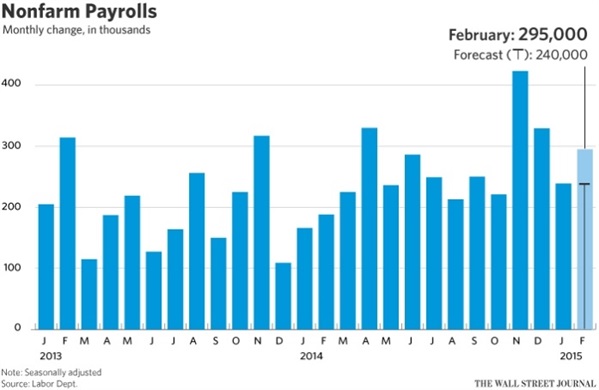 Next time you catch the gaze of an attractive woman across the room batting her eyelashes, think twice before buying her a drink and approaching to ask for her number. She may not be flirting, especially if she is wearing mascara. Eyelashes exist to reduce evaporation and dust from getting into the eye, thus keeping them appropriately moist and clean. Over time, mammals have developed the ideal eyelash length, which scientists believe to be roughly one third of the width of the eye. Researchers from Georgia Tech recently set out to discover if bigger is better for eyelashes, and the answer is a resounding no. While longer and fuller eyelashes may look more attractive, they actually create in effect a miniature wind tunnel that funnels more air and dust into the eye. The scientists conducted this study to help madarosis patients, or people who lose eyelashes for health reasons and are more prone to eye infections. However, it raises a more interesting question: how many marriages that were thought to have begun from a flirtatious bat of the lashes were simply just the result of itchy, dry eyes?