The euphoria felt after last week’s Federal Reserve meeting was overwhelmed by nervousness this week as equities erased nearly all of the gains posted last week. The S&P 500 collapsed 2.2%, the Dow Jones Industrial Average fell 2.3% and the technology-heavy Nasdaq composite was cut by 2.7%. The negative momentum could continue. Equities face a couple of obstacles from deteriorating earnings momentum, historically high valuations, a slowing economy and a stronger dollar. This coupled with a lighter than normal period for economic news releases and fewer corporate share repurchases heading into earnings season could continue exerting downward pressure on markets. 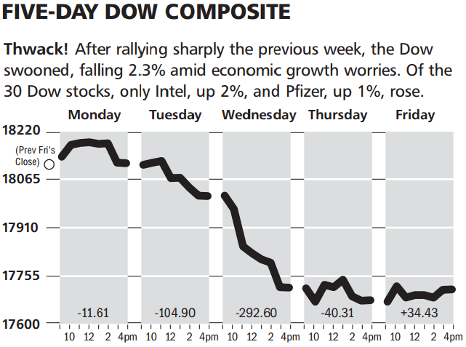 Give me Your Tired, Your Poor, Your Huddled Masses Yearning For Yield

Last Wednesday, the U.S. government auctioned $13 billion of two-year, floating-rate Treasury notes and it drew the most interest from overseas investors since the securities began selling at the beginning of 2014. The appeal of floating rate debt has been growing lately in anticipation of the Federal Reserve raising rates. These instruments offer more protection than fixed rate securities in a rising rate environment. The allure is even greater for international investors where yields in their home countries are paltry or negative.

What’s in a Name?

Hedge funds have embarked on a public relations campaign to change their image, starting by calling themselves something else. Years of underperformance and public scrutiny for lavish pay have prompted several hedge funds to rebrand as alternative asset managers, investment holding companies or private partnerships. Regardless of what they are known as, their numbers have swollen over the last decade. According to HFR Inc, an industry research group, there are more than 8,000 hedge funds managing approximately $2.8 trillion as of the end of 2014.

A recent report from Credit Suisse estimates that more than $300 billion of foreign profits were repatriated or earmarked to be brought back home by U.S. firms in 2014. This is the most since 2005 when more than $359 billion returned to U.S. shores. The catalyst back then was a “tax holiday” enacted by Congress. The reason for the latest surge is unclear. Domestic companies are sitting on more than $2 trillion of foreign earnings. A significant chunk of this is held in cash overseas to minimize taxes; bringing it back home would require paying the 35% corporate tax rate. Despite this, an increasing number of domestic companies brought back cash in 2014 to repurchase shares and pay down debt. 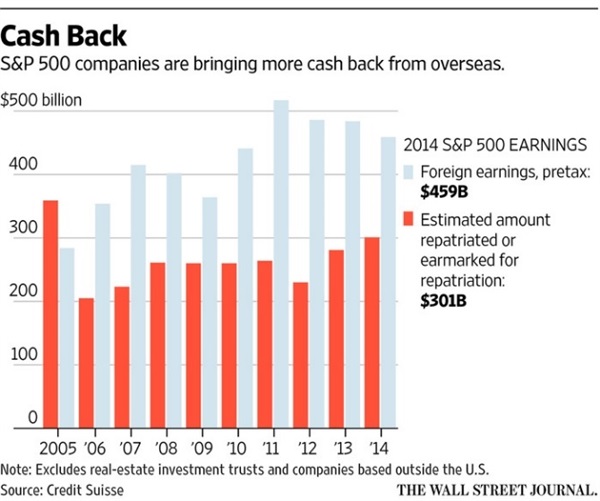 Have you ever wondered why electric eels don’t electrocute themselves? It sounds like the beginning of a Seinfeld stand-up comedy routine, but the truth is no one really knows for sure. The freshwater fish have specialized organs that create an electric charge up to 650 volts used to navigate, communicate, and even stun prey. But they never seem to shock themselves. The two keys may be body size and the conductivity of water. Eels can grow up to eight feet long and weigh nearly 50 pounds. This makes them much larger than most victims. Also, out of water the eels can spasm since the charge doesn’t dissipate in air like it does in water and concentrates on the fish’s wet skin. Genetic sequencing may be unlocking the mystery. A team of scientists at Vanderbilt found that several electric fish express the same genes that build specific proteins for insulation. Still, this silly question remains a mystery.

*Opinions expressed are subject to change without notice and are not intended as investment advice or to predict future performance. The opinions voiced in this material are for general information only and are not intended to provide specific advice or recommendations for any individual. To determine which investments may be appropriate for you, consult with your financial advisor.
* The Standard & Poor's 500 (S&P 500) is an unmanaged group of securities considered to be representative of the stock market in general.
* The 10-year Treasury Note represents debt owed by the United States Treasury to the public.
* The Dow Jones Industrial Average is an unmanaged group of securities demonstrating how 30 large publicly owned companies have traded and cannot be invested into directly.
* The MSCI Japan Index is designed to measure the performance of the large and mid-cap segments of the Japanese market. With 314 constituents, the index covers approximately 85% of the free float-adjusted market capitalization in Japan.
* Indexes are unmanaged, statistical composites and their returns do not include payment of any sales charges or fees an investor would pay to purchase the securities they represent. Such costs would lower performance. It is not possible to invest directly in an index.
* Past performance does not guarantee future results.
* Charts and graphs should not be relied upon as the sole basis for any investment decision and are for general informational purposes only.
* The prices of small cap stocks are generally more volatile than large cap stocks.
* Consult your financial professional before making any investment decision.
* This newsletter was prepared by CWM, LLC.
* Yahoo! Finance is the source for any reference to the performance of an index between two specific periods.
Sources:
http://www.wsj.com/articles/u-s-companies-bring-more-foreign-profit-home-1427154070
http://www.popsci.com/why-dont-electric-eels-electrocute-themselves?con&dom=newscred&src=syndication
http://www.businessinsider.com/hedge-funds-dont-want-to-be-called-hedge-funds-anymore-2015-3
http://www.wsj.com/articles/foreign-investors-gobble-up-floating-rate-treasury-notes-1427392296
http://online.barrons.com/articles/stocks-sag-2-as-economic-news-disappoints-1427513848