Stocks reversed course this week as the Fed hinted it would raise rates later and slower than investors anticipated. This pushed the S&P 500 up 2.7% for the week. The Dow Jones Industrial Average rose 2.1%, and the Nasdaq Composite climbed 3.2%. Rates on the 10-year treasury dipped back below 2%, and the dollar tumbled as the Euro rose above $1.10.

Not Patient, But Not Impatient

As expected, the U.S. Federal Reserve removed the word "patient" from its policy statement following the meeting of the open market committee this week. What wasn't expected were several revised forecasts that hinted the Fed eyes more slack in the economy that it previously had. The midpoint of its 2015 GDP growth forecast was trimmed from 2.8% to 2.5%. The core inflation rate was lowered. The language describing the macroeconomic backdrop was changed from "expanding at a solid pace" to "moderating," and the non-accelerating inflation rate of unemployment was lowered from approximately 5.5% to 5.2%. The Fed expects the unemployment rate to hit this level in the fourth quarter of 2015, implying rate hikes might come in September or December now. 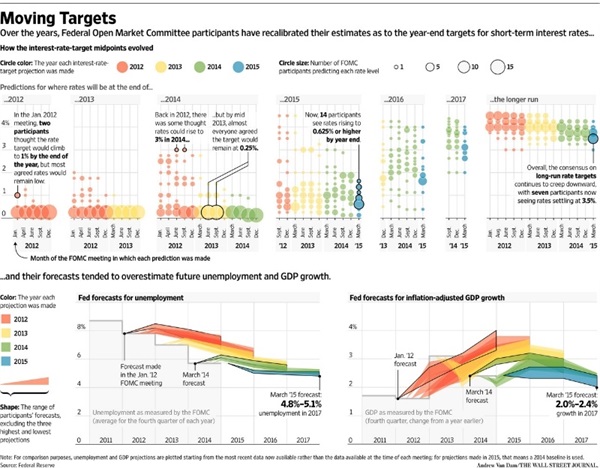 The U.S. equity market has been the place to be over the past six years. However, sentiment is changing quickly. A recent survey from Bank of America Merrill Lynch highlights that institutional investors are venturing abroad. According to the survey, 19% of global asset allocators are underweight domestic equities, the highest level since 2008. Roughly 63% of respondents indicated that Europe is the region they expect to overweight over the next 12 months. This is up from just 18% in January. Japan is also becoming increasingly popular given the MSCI Japan index is up 11% in dollar terms year to date, more than four times better than the S&P 500's 2.4% rise.

How Low Can They Go

As the U.S. Federal Reserve contemplates when to raise rates, other parts of the world continue to push interest rates deeper into negative territory. Last Wednesday Sweden's central bank cut its benchmark rate to negative 0.25%, and announced it would purchase $3.45 billion of government bonds. Sweden's currency, the krona has risen 4% against the Euro over the past month, and it is afraid the rising value will reverse the modestly improving inflation rate. February's measure (0.1%) turned positive for the first time in seven months, but it is still well below the central bank's target of 2%. The slide into negative territory may not be finished. Some experts forecast that Sweden's central bank will need to push through more than $25 billion of quantitative easing in order to keep pace with the European Central Bank's program and protect its currency. This is nearly double the amount of bond purchases since last October. 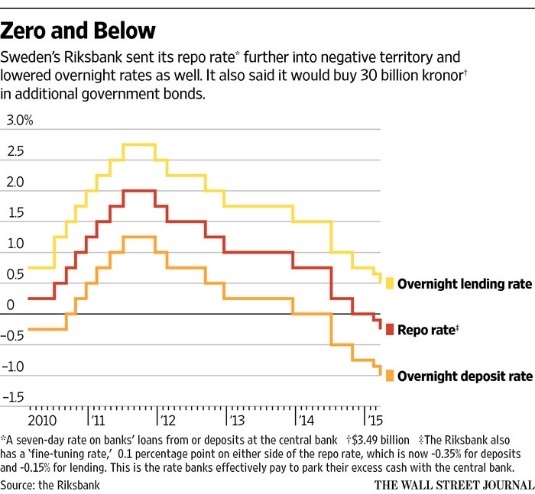 Ever since the beginning of robotic technology, humans have been concerned about robots stealing jobs. Now animals should worry too. Last week at the annual South by Southwest festival in Austin, Texas, the event organizer sponsored a petting zoo for robots. Within the robot petting zoo, festival participants could interact with drones, robots used during the Fukashima nuclear disaster and even interact with small robots designed to help children learn the basics of programming. One of the more interactive residents of the petting zoo was BlabDroid, designed by an MIT student to study how humans interact with robots. BlabDroid asked passersby random questions like, "tell me something that you've never told a stranger before." The robot was equipped with a camera and several participants obliged. Some even relaxed on the floor and began venting about daily stresses and deep secrets. Small farm animals and psychiatrists beware.

Opinions expressed are subject to change without notice and are not intended as investment advice or to predict future performance. The opinions voiced in this material are for general information only and are not intended to provide specific advice or recommendations for any individual. To determine which investments may be appropriate for you, consult with your financial advisor.
* The Standard & Poor's 500 (S&P 500) is an unmanaged group of securities considered to be representative of the stock market in general.
* The 10-year Treasury Note represents debt owed by the United States Treasury to the public.
* The Dow Jones Industrial Average is an unmanaged group of securities demonstrating how 30 large publicly owned companies have traded and cannot be invested into directly.
* The MSCI Japan Index is designed to measure the performance of the large and mid-cap segments of the Japanese market. With 314 constituents, the index covers approximately 85% of the free float-adjusted market capitalization in Japan.
* Indexes are unmanaged, statistical composites and their returns do not include payment of any sales charges or fees an investor would pay to purchase the securities they represent. Such costs would lower performance. It is not possible to invest directly in an index.
* Past performance does not guarantee future results.
* Charts and graphs should not be relied upon as the sole basis for any investment decision and are for general informational purposes only.
* The prices of small cap stocks are generally more volatile than large cap stocks.
* Consult your financial professional before making any investment decision.
* This newsletter was prepared by CWM, LLC.
* Yahoo! Finance is the source for any reference to the performance of an index between two specific periods.