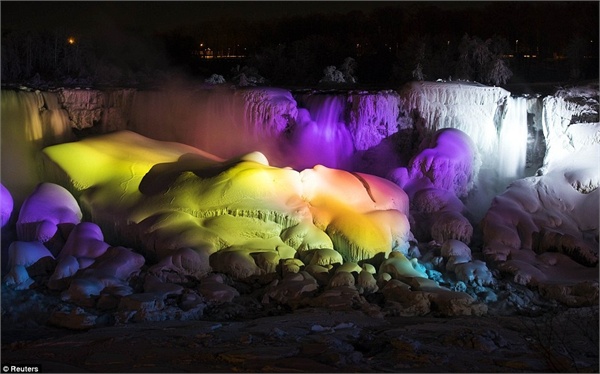 It’s official, the weather has been bad this winter. So bad that, as pictured above, Niagara Falls froze over for the second time! While poor climate conditions across the majority of the United States has negatively affected the overall economy, investors have continued to find enough reason to bid up stock prices to fresh all-time highs. Last week, the S&P 500 was higher for the second consecutive week, gaining 1 percent to finish at a new record close of 1878.04, despite a momentary setback on Monday due to the Ukraine-Russia situation. 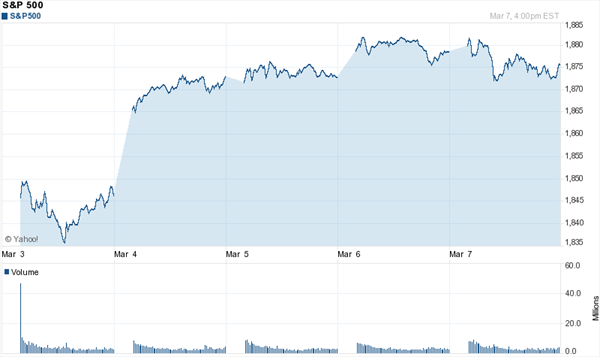 Despite having an atrocious start to the week, investors quickly became rational about the situation unfolding between Russia and Ukraine. Stocks in the U.S. sold off by the largest percentage in a month, declining 0.7 percent on Monday. However, that was relatively modest compared to how Russian stocks performed, seeing as they recorded their worst day in over five years, according to Bloomberg. For example, the Market Vectors Russia ETF Trust dropped over 9 percent on Monday, according to The Wall Street Journal. Interestingly, investors have made it commonplace to exhibit knee-jerk reactions after unexpected events. In the past, there have been several “market shocks,” as listed below, and investors have almost always reacted the same way. Data from S&P Capital IQ would indicate that since World War II, the S&P 500 has historically sold off about 2.4 percent on events similar to the Russia-Ukraine event before bottoming out after only 6 days, and fully recovering within 14 days, on average. 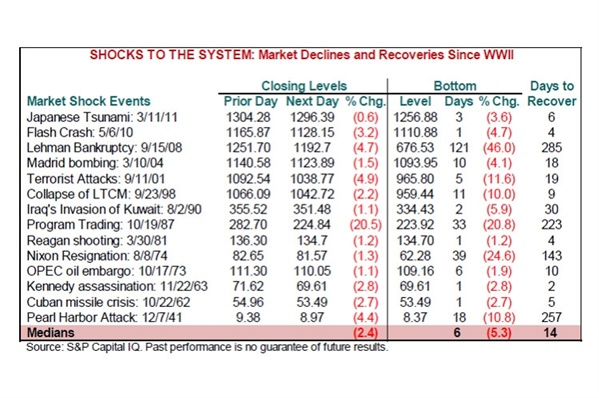 The Labor Department reported last Friday that U.S. employers added 175,000 jobs in February, and that the unemployment rate increased to 6.7 percent from 6.6 percent. Investors cheered the report for two reasons: 1) expectations were for only 157,000 jobs to be created, and 2) the labor force grew by 264,000, as some discouraged workers who had previously abandoned the workforce altogether returned to the job market. 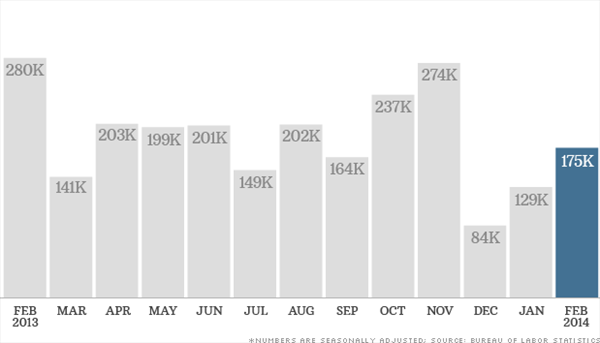 What if you only invested at market peaks? This was a question that author Ben Carlson recently took on and answered on his website A Wealth of Common Sense. His analysis assumed that a hypothetical investor habitually saved his money in cash, and then only purchased stocks just before severe contractions in the market. However, in order to emphasize that as long as you don’t panic and sell at the bottoms of markets, you can actually still end up growing your assets quite nicely. In this example, the investor grew his $184,000 savings to over $1.1 million over a 40+ year time horizon, even though he only put his money in before the market tanked. It’s an interesting example that really highlights the dangers of selling out of investments simply because their price declined, and furthermore shows the value that can be added by having a good financial advisor in your corner to calm your nerves during rough periods. Now, this example only assumed the hypothetical investor got one side of market psychology correct by not selling at market bottoms. If he had not only avoided selling at bottoms, but also stood by a more consistent method of purchasing, his investments could have compounded to over $2.3 million over the same time period! The article can be found here: http://awealthofcommonsense.com/worlds-worst-market-timer/