Whether it was despite or because of equity, investors shrugged off positive economic news last week and sent equities lower and bond yields higher. The S&P 500 dipped 0.7%. The Dow Jones Industrial Average fell nearly 1%, while the NASDAQ Composite was essentially flat. The yield on the U.S. 10-year Treasury jumped 30 basis points to 2.4%, the largest gain in nearly two years. And, earlier in the week the yield on the 10-year German Bund jumped to 0.88% reaching a new high after nearly dipping into negative territory just a few short months ago.

The last day of the week brought good economic news with the jobs report where the headline number was 280,000, well above the consensus estimate of 225,000. The unemployment rate moved slightly higher to 5.5% due largely to better workforce participation. The most impressive part of the jobs report was the rising trend in wage growth. The average hourly earnings spiked 0.3% month over month. This was better than the 0.2% forecast, but more importantly, pushes the year-over-year gain to 2.3% in May. This has improved ten basis points for each of the past two months and is up from just 1.8% at the beginning of the year. This strong initial report for May already has many economists declaring a September rate hike from the Federal Reserve is a certainty. 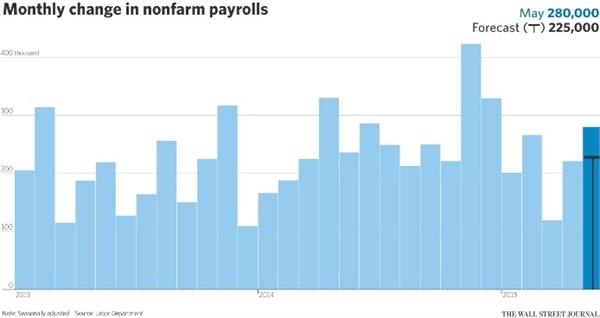 Cloudy With a Chance of Inflation

Last week, Citigroup published research predicting that countries in Asia could see severe economic impacts from weather, notably big increases in food prices. Three countries called out specifically were India, Indonesia and The Philippines, given the high share of food as a percentage of the consumer price index basket and agriculture as a percentage of both GDP and the labor pool for each. The rainy season in most Asian countries is beginning now, and sea surface temperatures are at the highest reading since late 2009 suggesting a strong El Niño this year. The last two severe El Niño episodes created prolonged droughts that damaged a significant amount of crops and created a surge in food prices. It’s worth nothing that last year similar warning signs turned out to be a false alarm.

Wall Street has often been considered a “boys club,” but new findings from Morningstar show how few women there are in the fund management business. Just 2% of assets are managed by women in the United States. The study claims that of the 7,700 portfolio managers in the United States, fewer than 10% are women. This compares to female doctors (37% of professionals) or lady lawyers (33%). Similarly, the United Kingdom suffers from the same lack of diversity since just 7% of UK funds are managed or co-managed by a woman. You have to wonder how much untapped talent the industry is missing given very little representation from roughly half of the population.

Anyone who was watched a few minutes of the NBA playoffs this year has probably gotten used to a familiar sight: Stephen Curry toeing the free throw line with his mouth guard dangling out the side of his mouth. Curry was the most accurate free throw shooter in the NBA this season with an average over 90%, one of the many feats that won him this year’s league MVP award. But, the interesting thing is he shoots better when he’s chewing his mouth guard, which is probably why we’ve seen more it during the playoffs. During the regular season, he took just around one-third of his shots from the charity stripe wearing his mouth guard. He made 89.5% of them. Two-thirds were taken while chewing it and his shooting percentage for these was nearly 93%. Given the widespread use of data analysis in professional sports these days, perhaps someone tipped him off? Through two games in the finals against the Cavaliers Curry is 11 for 12 from the free throw line.

* Opinions expressed are subject to change without notice and are not intended as investment advice or to predict future performance. The opinions voiced in this material are for general information only and are not intended to provide specific advice or recommendations for any individual. To determine which investments may be appropriate for you, consult with your financial advisor.
* The Standard & Poor's 500 (S&P 500) is an unmanaged group of securities considered to be representative of the stock market in general.
* German Bunds: German word for "bond." A bond issued by Germany's federal government, similar to U.S. Treasuries, the German government uses bunds to finance its spending.
* The Nasdaq Composite Index is a market-capitalization weighted index of the more than 3,000 common equities listed on the Nasdaq stock exchange. The types of securities in the index include American depositary receipts, common stocks, real estate investment trusts (REITs) and tracking stocks.
* The Dow Jones Industrial Average is an unmanaged group of securities demonstrating how 30 large publicly owned companies have traded and cannot be invested into directly.
* Indexes are unmanaged, statistical composites and their returns do not include payment of any sales charges or fees an investor would pay to purchase the securities they represent. Such costs would lower performance. It is not possible to invest directly in an index.
* Past performance does not guarantee future results.
* Charts and graphs should not be relied upon as the sole basis for any investment decision and are for general informational purposes only.
* The prices of small cap stocks are generally more volatile than large cap stocks.
* Consult your financial professional before making any investment decision.
* This newsletter was prepared by CWM, LLC.
* Yahoo! Finance is the source for any reference to the performance of an index between two specific periods.