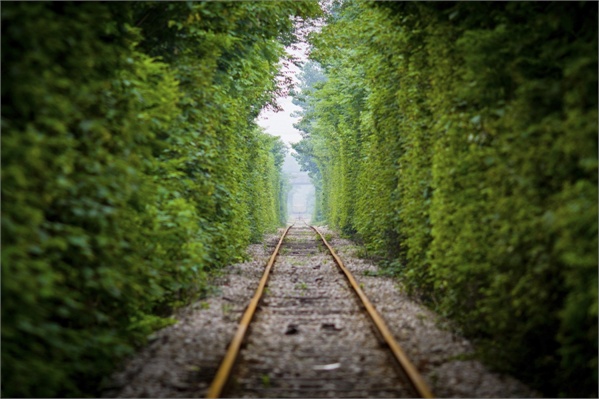 Stocks once again breached new territory last week, as the S&P 500 notched positive gains each of the five trading days and closed out Friday at a new all-time high of 1962.87. The index is up 6.2 percent in 2014 after having added 1.38 percent last week. Investors continued to push equities higher as the Federal Reserve and other economic data confirmed the U.S. economy remains on the mend. The S&P 500 has now achieved gains in four of the prior five weeks.

Last Wednesday, the Federal Reserve concluded their most recent two-day meeting and issued several statements that gave investors reason to believe the future is bright for both the economy and stocks. While overall economic growth estimates for 2014 were reduced, Fed Chair Janet Yellen stated, “Economic activity is rebounding in the current quarter and will continue to expand at a moderate pace thereafter.” Fed officials continue to point to the unusual climate conditions as the culprit for the slowdown witnessed in the first quarter of this year. Interest rate forecasts for the next year were slightly elevated; however, investors were most interested in the lowered long-run interest rate forecast of 3.75 percent. This is down from a previous estimate of 4.0 percent, and is likely one of the primary reasons stocks rallied in the latter part of the week. The chart below has a dot for each voting members’ estimates on where the federal funds rate will be for the respective time period. As the longer run rate has been reduced, investors interpret this as good news, considering it means the Fed is poised to remain accommodative with their monetary policy, and therefore assist economic growth for years to come. 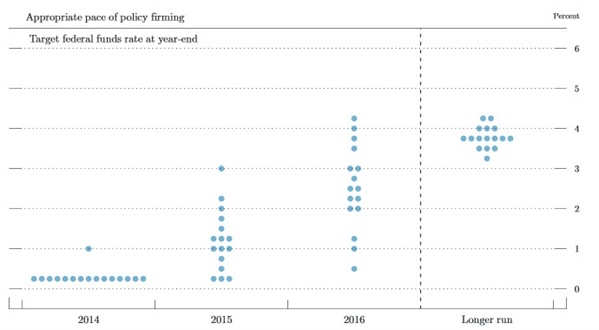 We commented earlier this year on the huge spending spree American corporations have been on in 2014. Well, there’s no sign that this trend will abate anytime in the near future. Through June 18th, $785.5 billion worth of mergers and acquisitions activity has been announced. This figure easily trounces the annual totals for each of the previous seven years, and is already approaching the mammoth $880.7 billion total for all of 2007. This activity can likely be attributed to historically low interest rates and record high amounts of idle cash resting on corporate balance sheets. It’s safe to say that this level of activity has been at least partially responsible for the continuous march higher in stock prices. As long as it continues, this level of deal making provides yet another bullish trend for the markets. 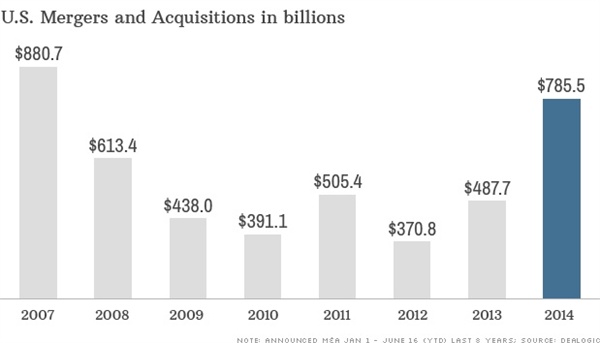 In case you haven’t noticed, America is all of a sudden becoming interested in soccer. The 2014 FIFA World Cup is well under way and while the USA is off to an impressive start to the tournament, U.S. citizens are taking notice. Initial Nielsen ratings estimate that nearly 17 million people tuned into the U.S. squad’s first match against Ghana last Monday. This is the largest total television/Internet audience ever for a U.S. soccer match. To put this into perspective, only 6 million people tuned into the National Hockey League Stanly Cup finals, and it’s nearly in line with the number of viewers for the National Basketball Association finals. While this level of viewership is still no match for the National Football League’s Super Bowl audience of over 110 million, it’s an impressive draw nonetheless. And after beating Ghana on Monday and tying Portugal on Sunday, the U.S. match against Germany on Thursday, June 26th, could determine whether or not the team advances to the next stage of the World Cup tournament. In other words, GO TEAM USA!