Major markets were buoyed higher mid-week by dovish comments from the Federal Reserve only to give back most of the gains on Friday as concerns about a Greek default heightened. The S&P 500 rose 0.8% for the week. The Dow Jones Industrial Average moved 0.7% higher. And, the Nasdaq Composite gained 1.3%. Nearly halfway through the year, the S&P 500 is up almost 2.5% and has traded in a tight range between plus or minus 3.5% since the beginning of 2015. This is the closest the market has stayed to its starting value this far into the year, according to Bespoke Investment Group. This could signal a happy ending for the year. According to that research firm, the market has risen on average 6.6% during the 10 years during which the S&P 500 has traded in the tightest trading ranges for the first 117 trading days.

Last week, the Federal Reserve signaled that it was still anticipating raising rates later this year but the pace of rate hikes might be lower than many originally anticipated. The Federal Reserve Chairwoman, Janet Yellen, commented that economic conditions are progressing at a pace that warrants only “gradual increases in the target federal funds rate.” During this recent Federal Open Market Committee meeting all eyes were on the “dot plot,” a chart that visually demonstrates where each individual voting member thinks the Fed funds rate should be at specific points in time. The June chart showed a considerable reduction in anticipated rates for the remainder of 2015 and 2016. The median estimate for 2016 has been lowered to 1.625% from 1.875% at March’s meeting. The following year was lowered too; 2017 has shifted to 2.875% from 3.125% a few months ago. However, the dot plot still suggests an initial rate hike in September. 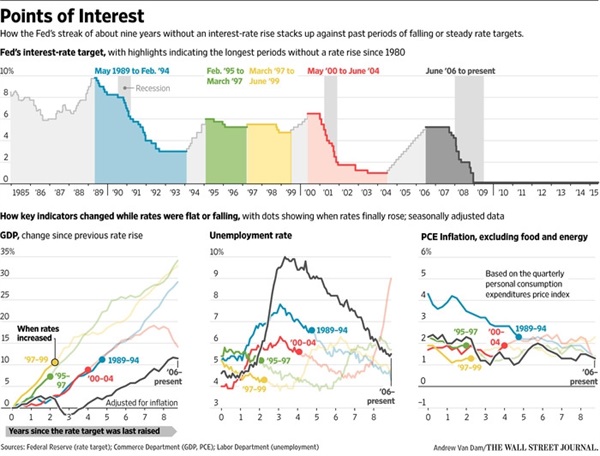 Modest inflation pressures are beginning to take root as U.S. consumer prices posted the biggest monthly gain since 2013 during May. According to the Labor Department, the Consumer Price Index, or CPI, rose to a seasonally-adjusted 0.4% during the month of May. However, most of the gain came from higher energy prices that are up 4.3% month-over-month despite being 16% lower than this time last year. Gasoline prices rose double-digits on a seasonally-adjusted basis during the month. When volatile energy prices are excluded, the core CPI jumped just 0.1%. This is up 1.7% year-over-year, right in the middle of the range where this measure has remained since 2012. The measure of inflation is one that is closely watched by the Federal Reserve and it continues to run lower than the long-run objective.

Crowdsourcing has become one of the notable buzzwords of the internet age. The term was created by an editor at Wired Magazine in 2005 after having several conversations about how businesses were using the internet to outsource work to individuals. However, the idea is not new; 2015 marks the 100-year anniversary of what is perhaps crowdsourcing’s best achievement: the iconic Coke bottle. In 1915, nearly three decades after its invention, Coke was losing market share to hundreds of cola competitors that emerged. The majority shareholder at the time, Georgia businessman Asa Griggs Candler, launched a national contest to design a bottle that would stand out in the crowd and signal Coke’s premium status. The Root Glass Company of Indiana came across an illustration of cocoa pods when thumbing through a dictionary for the word “coca.” Even though Coke has nothing to do with the cocoa pod the team liked the shape of pod and designed their winning entry with a similar shape.