Cool Start to the New Year

Following the best annual performance for the S&P 500 since 1997, investors waded cautiously into the New Year, as evidenced by the S&P 500 retreating 0.6 percent last week. While 2013’s impressive stock market rally run concluded with a 30 percent calendar year gain, 2014 began with stocks notching their largest one-day loss in three weeks on the opening day. Furthermore, last Thursday marked the first opening session of a year since 2008 where stocks finished trading lower. 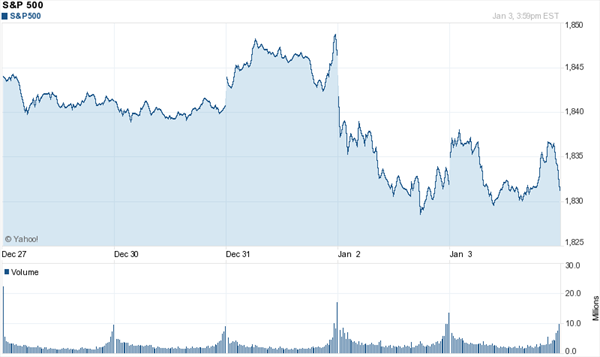 Stocks Not the Only Thing Down to Start the Year

Across the nation temperatures were expected to kick off the first weekend of the new year by testing all-time low temperature records. According to the Associated Press, one meteorologist called it a “polar vortex,” which is caused by a counterclockwise-rotating pool of cold, dense air. The air has supposedly accumulated in the North Pole and will be pushed down towards the United States resulting in freezing cold conditions. Temperature expectations going into Sunday were for lows as deep as 25 below zero in Fargo, North Dakota and minus 31 in parts of Minnesota, and for wind chills to reach an unfathomable 52 degrees below zero in North Dakota.

Hopefully All the New Cars Purchased in 2013 Have a Garage

Despite colder than normal temperatures being blamed for lackluster car sales in the month of December, 2013 was still the best year for the car industry since 2007, according to Bloomberg. Kelley Blue Book analyst Karl Brauer was quoted as saying, “New car sales in 2013 represent a 50 percent increase from the depths of the recession just a few years ago.” Even with December’s mediocre 0.3 percent growth rate, auto sales industry wide still grew 7.6 percent to 15.6 million total cars sold for all of 2013.

Bernanke Suggests Economy Could Heat Up in 2014

Federal Reserve Chairman Ben Bernanke gave one of his final speeches last week and offered up some optimistic thoughts for 2014. He suggested that certain forces, such as federal spending cuts and tax increases which were holding the economy back from growing in 2013, are abating. This aligns with his statements he made at a December 18 press conference following the somewhat surprising decision to begin tapering their monthly asset purchases from $85 billion to $75 billion. While positive comments on the health of the U.S. economy would normally be great news, there still appears to be no consensus opinion among investors whether or not a reversal in Fed policy, that has expanded the Central Bank’s balance sheet to $4 trillion, as depicted below, will prove to be a positive or negative for stock investors. A still unanswered question is how much the Fed’s easy money policies have contributed to the recent stock market rally and whether or not it can continue as the Fed unravels an unprecedented amount of monetary stimulus. 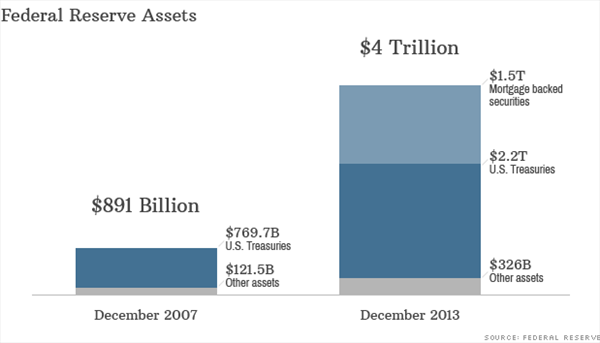