The move by the European Central Bank (ECB) sent markets higher last week during the holiday-shorted trading session. The S&P 500 rose 1.6%, the Nasdaq Composite jumped 2.7% and the MSCI World Index, which measures performance of developed countries, gained 2% as well. Interestingly, the energy sector displayed some signs of stabilization, gaining 2% for the week even as oil prices continued to tumble. Now that the ECB has announced its easing program, investor attention should turn toward fourth quarter earnings, which have been somewhat mediocre. So far, roughly 60% of companies that have reported beat earnings expectations. This is slightly below the average for the past several quarters, but it is still early. Only 179 companies have released results so far; more than 450 are expected to report this week.

After months of anticipation, the European Central Bank finally announced its quantitative easing program, committing to purchase sixty billion Euro worth of bonds each month. The program will begin in March and run through September 2016, or for however long it takes to pull the Eurozone out of the deflationary environment it slipped into in late 2014. The size of the program took investors by surprise and sent European equities higher and the Euro lower following the announcement. One of the key aspects of the program is that national central banks will assume the overwhelming majority of losses from any default. 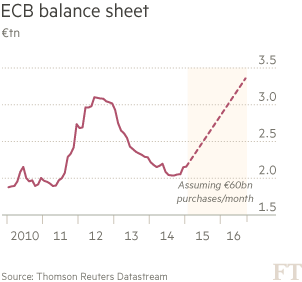 Few rejoiced more when Mario Draghi opened his checkbook than gold bugs. This week the shiny yellow metal reached five-month highs when it traded close to $1,300 an ounce. Accommodating central banks, the move by the Swiss National Bank last week to drop its currency ceiling and the coming Greek elections are all introducing uncertainty and a fear of currency wars. Interestingly, the price of gold is rising alongside the strength of the U.S. dollar. Usually a stronger dollar puts pressure on gold, but the two moving in tandem is indicative of how worried investors are about economic problems in Europe, Japan and much of the emerging markets. 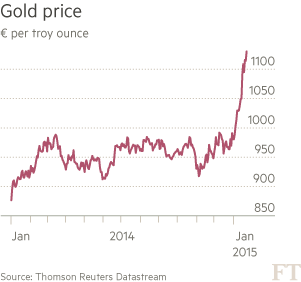 A week after the World Bank lowered its worldwide growth forecast the International Monetary Fund (IMF) reduced its outlook as well. While the IMF acknowledged that lower oil prices would provide some relief for most of the world, the organization claims Japan, Europe and China will anchor worldwide results. The fund is now expecting the world economy to rise 3.5% in 2015 and 3.7% in 2016. On the same day, China reported its economy expanded 7.4% for 2014, the slowest pace of growth in more than twenty five years. While expansion of this pace is the envy of most of the developed world, China needs the economy to grow at least this fast to create job growth. 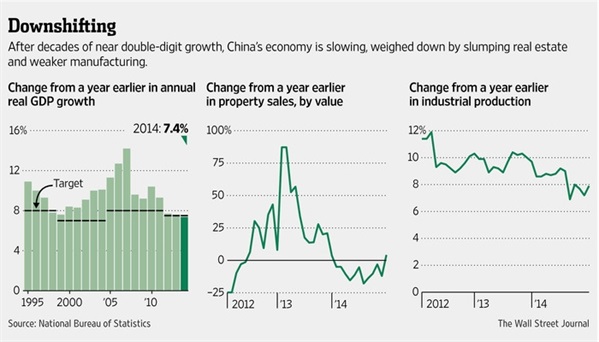 While your opinion of the New England Patriots may not have been tarnished by “Deflate-gate,” you might still want to root against them during this weekend’s Superbowl if you don’t want to take the air out of your portfolio. The so-called Super Bowl Indicator has predicted the direction of the stock market 81% of the time, and it hasn’t been wrong since 2008. According to the novel, but surprisingly accurate, indicator markets rise when a team from the original National Football League hoists the Lombardi Trophy, and they fall when a team that traces its roots to the pre-merger American Football League wins. The indicator of course has no scientific basis, and in fact its success stems from a stacked deck. Expansion teams since the 1970 merger of leagues count as those coming from the original NFL. So do the Pittsburgh Steelers, despite being in the AFC, since they were members of the original NFL before jumping to the AFL. This means more than 60% of teams in the NFL would signal a rising stock market if they win the Superbowl. Since markets tend to rise over time, this fun stock market indicator is the beneficiary of coincidence more than anything else.