Continued declines in oil and increasing concerns about slowing worldwide growth put more pressure on equities this week. The S&P 500 finished the week down 1.3% while the Nasdaq Composite and Dow fell similar amounts. The volatility also strengthened the flight to safety, pushing the yield on the 10-year Treasury to 1.83%.

Not Neutral When It Comes To Currency

One of the volatility drivers last week came from the Swiss National Bank when it shocked markets by removing the floor on the value of the Swiss Franc versus the Euro. This move comes almost exactly one month after the Swiss central bank renewed its commitment to protecting its currency from surpassing 1.20 versus the Euro by enacting negative deposit rates. The Swiss Franc surged 30% against the Euro, and the Swiss stock market plummeted 10% immediately following the announcement. Switzerland’s status as a safe haven has attracted capital since the financial crisis, creating a rise in the currency’s value. Central bankers have sought to contain the rise, but this was becoming increasingly difficult. The sudden appreciation has already wiped out a couple of hedge funds and more casualties could emerge over the next several weeks. Some experts view this move as a strong indication that the European Central Bank will proceed with a broad quantitative easing program later this week. Massive bond buying by the ECB would have made it extremely difficult, if not impossible, for the Swiss national bank to continue defending its currency. 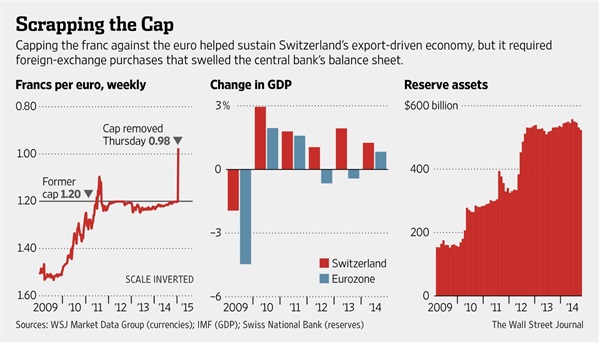 Last week the World Bank lowered its global growth outlook to 3%. This is better than the rate of expansion in 2014, but nearly a half a percent lower than the previous 2015 projection. The bank’s chief economist cited the U.S. economy as the lone bright spot, declaring “the global economy is being pulled by a single engine.” Another economic expert, “Dr. Copper,” agrees. Last week, copper prices fell to five-year lows. The commodity price is often cited as a leading indicator for worldwide growth given its broad industrial usage around the world. Contracts for March delivery priced a pound of copper at $2.64, its lowest rate since July 2009.

The Silver Lining of Low Rates

While lower rates worldwide are frustrating income seeking investors, one group is benefitting: home buyers. According to Freddie Mac, the average 3-year fixed rate mortgage measured 3.73%, and many seem to be taking advantage. Last week the Mortgage Bankers Association released data showing a 30% year-over-year rise in mortgage applications. The volume is the highest in more than two years, and most of the increase is coming from borrowers seeking to refinance. Some regulatory changes are also spurring activity as fees are being cut on popular federal loan programs. Home buying statistics in the winter are volatile due to the limited volume, but declining mortgage rates could continue to spur activity as the weather warms over the next several months. 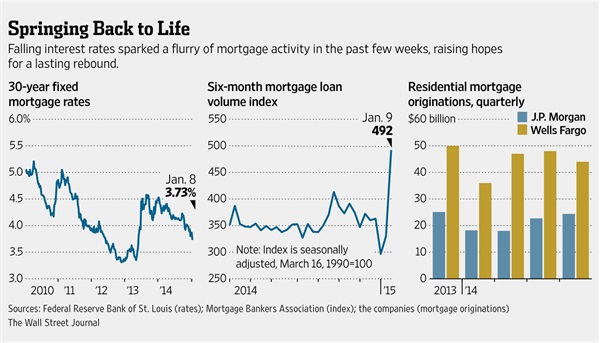 “You are what you eat” is the old saying, but perhaps now it should be updated to “you are where you live.” The makeup of neighborhoods is often dictated by socioeconomic factors; wealthy people tend to live around other wealthy people and ethnic groups congregate in certain neighborhoods. However, a study recently published in Proceedings of the National Academy of Sciences suggests that psychological factors may play as big a role in determining where we lay our heads at night as well. The researchers surveyed over 56,000 residents of London and mapped results based on the five personality traits defined by the well-known five-factors model: openness to experience, extraversion, agreeableness, conscientiousness, and emotional stability. The results were interesting. Extroverts tend to congregate in city centers and those open to new experience live in more ethnically diverse neighborhoods (no surprise). However, if you are looking for someone who is emotionally stable, head for the suburbs.