The roller coaster ride continues as stocks soared this week and recovered ground lost at the end of January. The S&P 500 jumped 3% for the week while the Nasdaq Composite and Dow Jones Industrial Average rose 2.4% and 3.8%, respectively.

On Friday, the Bureau of Labor Statistics reported the U.S. economy added 257,000 jobs, well above consensus and enough to make the trailing three-month figure one of the best in recent history. While the unemployment rate held steady at 5.7%, this was largely held in check by an increase in the number of Americans seeking employment. The labor force participation rate rose two tenths to 62.9%. Importantly, the report also showed some wage growth. Hourly wages were up 2.2% year-over-year, the highest rate of growth witnessed in five months. The improving labor picture increases the likelihood that the Federal Reserve will raise rates in June. This would be the first rate hike since 2008. 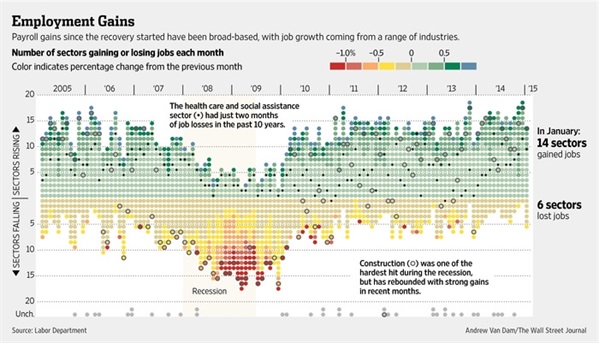 Domestic equities were not the only asset class to rally last week. Oil jumped 7% to cap off a 13% gain over the past half month. The weekly move is the largest percentage rise in almost four years. Investors are speculating that oil prices have bottomed after a series of recent announcements. Over the past couple of weeks, some of the largest producers have publicized cuts in capital expenditures. And, this week a large oil services company unveiled that the number of drill rigs in the U.S. fell to 1,140, down 29% from its October 2014 peak. Domestic production remains near multi-decade highs, and analysts still expect overproduction by as much as two million barrels a day through the first half of 2015, but recent cuts could shrink this and help support the current oil price that has already been cut by almost 50% since mid-June. 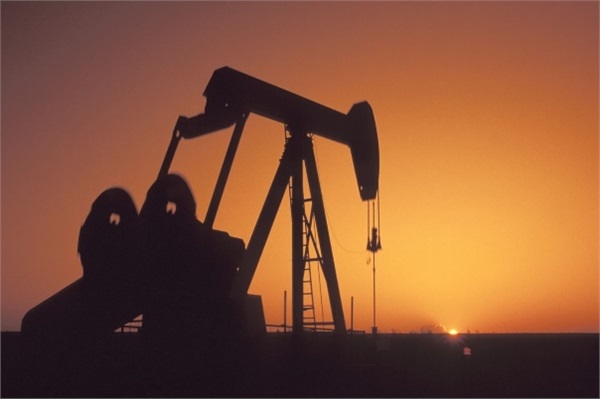 The Central Bank Doth Protest Too Much, Methinks

Last week Denmark’s central banker pledged to do “whatever it takes” to defend its currency when it lowered its benchmark interest rate for the fourth time in three weeks to negative 0.75%, one of the lowest around the globe. The country has also expanded its balance sheet to record size by printing Danish Krone to maintain a currency peg established in 1982. The peg has come under pressure recently after the European Central Bank announced its large-scale bond buying program. Currency speculators are betting the recent moves are last ditch efforts, and Danish National bank will eventually have to abandon the peg like the Swiss National Bank recently did. It is worth noting that Swiss central bankers issued similar do-whatever-it-takes edicts shortly before throwing in the towel. Denmark remains the only country with a peg to the Euro after the Swiss move to remove its peg and Lithuania’s move to remove the Euro last month. 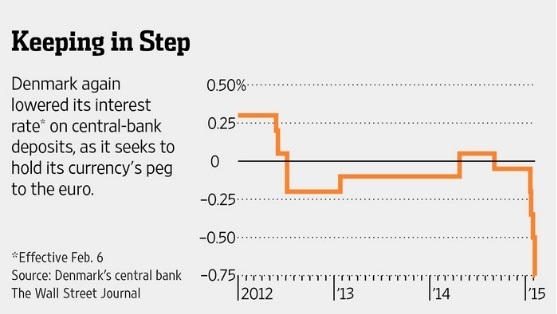 New Yorkers love pizza. And, if you are not convinced by the sheer number of shops slinging thin crust pies on the streets of Manhattan, perhaps the bacteria in the subway will do the trick. The New York City subway system shuttles more than 5.5 million people around the city on a typical weekday, and each carries microscopic stowaways as they pass through the turnstiles. A research team from the Weill Cornell Medical School recently released a map of microbes found in the subway system. They collected data by swabbing railings, trash cans, seats and other surfaces in the 466 subway stations in New York City and then geotagging each sample collection with a GPS location. Interestingly, a significant chunk of the 10 billion DNA fragments came from food items, specifically pizza. Bacteria associated with mozzarella cheese was discovered in nearly a third of all subway stations, and other traces of pizza ingredients were found almost everywhere.