Bulls stampeded this week as stronger fundamentals and easing geopolitical tensions aligned to send markets higher.The S&P 500 grew 2%, the Dow Jones Industrial Average rose 1.1% and the Nasdaq Composite jumped 3.2%. Small caps continued making up ground lost to large caps in 2014 during the week; over the past month the Russell 2000 has outgained the Dow by nearly 2%.

Is the Bond Bull Market Waning?

The same dynamics that caused equities to rise this week pushed bond prices lower as demand for “safety” in government debt was dampened after data released late in the week showed accelerating growth in Europe. This helped push the yield on the 10-year Treasury above 2% for the first time in over a month. The improvement in Europe comes on the heels of a better-than-expected jobs report at home that increases the likelihood the Federal Reserve will raise rates in the middle of the year. Additionally, a recent flurry of issuances of high-quality corporate bonds has diverted investor interest away from government securities lately.

During earnings season, management teams have been sending cautionary messages about future growth. So far, just under 400 companies in the S&P 500 index have reported their December quarterly earnings, and on average, profits and revenue have grown 6.3% and 1.4%, respectively. Revenue growth is below the recent averages, and much of this stems from the energy sector. But, while the current results have been impressive, guidance is less than stellar. The spread between percentage of companies raising guidance and those lowering expectations is negative 9.2%. This is the lowest reading since just after the financial crisis ended, which has resulted in expectations of 3.4% declines for first quarter earnings. This is down from 10% anticipated growth as recently as October 2014. 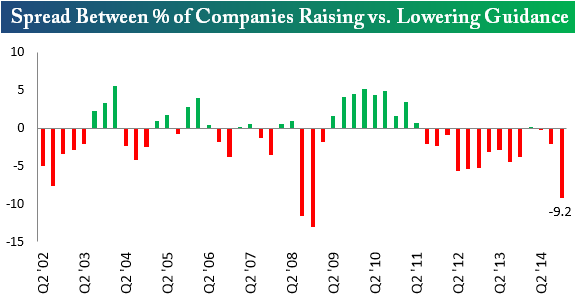 A Bull In Sheep’s Clothing

Thursday marks the beginning of the Spring Festival throughout most Asia, or what is more commonly known as Chinese New Year. We are entering the Year of the Goat, or Sheep. According to the Chinese Zodiac, people born under this sign tend to be gentle, creative, thoughtful and their lucky direction is north. This perhaps explains why the Year of the Goat is also very fortuitous sign for investors. According to research by Gluskin Sheff, a Canadian wealth management firm, the S&P 500 returns 26% on average during goat years. The second best is the Year of the Pig (up 20%). Gold bugs should also be happy to kick off the New Year since the precious metal averages a 45% gain during goat years.

As you were gazing into your partner’s eyes over a romantic Valentine’s dinner this weekend did you refer to him/her by a pet name? A recent Scientific American article dove into the significance of pet names in relationships. Are those that use them happier? According to survey’s about two-thirds of couples use pet names for each other, and usage of these terms of endearment are linked with higher relationship satisfaction during the first five years of marriage only. After that, the link between usage and happiness fades, according to one study. Interestingly though, what qualifies as a romantic pet name varies from county to country. While “honey,” “babe,” and “sweetie” are popular at home, common international names included: “mon petit chou” (France – my little cabbage), “media naranja” (Spain – half an orange), and “chang noi” (Thailand – little elephant). Despite the scientific data, my advice for a healthy marriage is simple: don’t call your husband or wife an elephant. 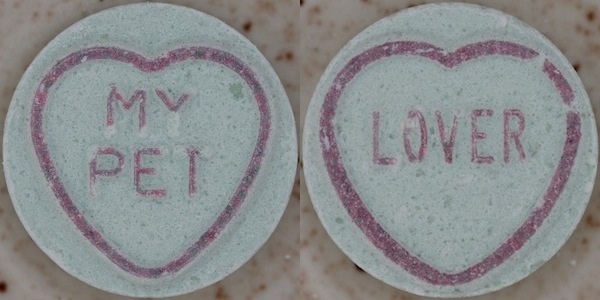 * Opinions expressed are subject to change without notice and are not intended as investment advice or to predict future performance. The opinions voiced in this material are for general information only and are not intended to provide specific advice or recommendations for any individual. To determine which investments may be appropriate for you, consult with your financial advisor.
* The Standard & Poor's 500 (S&P 500) is an unmanaged group of securities considered to be representative of the stock market in general.
* The 10-year Treasury Note represents debt owed by the United States Treasury to the public.
* The Dow Jones Industrial Average is an unmanaged group of securities demonstrating how 30 large publicly owned companies have traded and cannot be invested into directly.
* The Russell 2000 Index is a market capitalization-weighted index composed of 2000 stocks, including reinvestment of dividends, which is generally considered representative of small U.S. companies.
* The NASDAQ Composite Index is a market capitalization price-only index that tracks the performance of domestic common stocks traded on the regular NASDAQ market as well as National Market System-traded foreign common stocks and America Depository Receipts.
* Indexes are unmanaged, statistical composites and their returns do not include payment of any sales charges or fees an investor would pay to purchase the securities they represent. Such costs would lower performance. It is not possible to invest directly in an index.
* Past performance does not guarantee future results.
* Charts and graphs should not be relied upon as the sole basis for any investment decision and are for general informational purposes only.
* The prices of small cap stocks are generally more volatile than large cap stocks.
* Consult your financial professional before making any investment decision.
* This newsletter was prepared by CWM, LLC.
* Yahoo! Finance is the source for any reference to the performance of an index between two specific periods.