Don’t Call It a Comeback

After being roughed up and bruised to begin 2014, U.S. equities punched their way off the ropes last week, posting gains of at least 1 percent in consecutive days for the first time in over a year. The S&P 500 rallied 2.6 percent in just the last two trading sessions making it the best two-day performance for the index since October 11 of last year, according to Bloomberg. After much talk of the S&P 500 nearing correction territory, defined as a decline of 10 percent or more, stocks are now only 2.8 percent lower than the all-time high set on January 15 of this year. 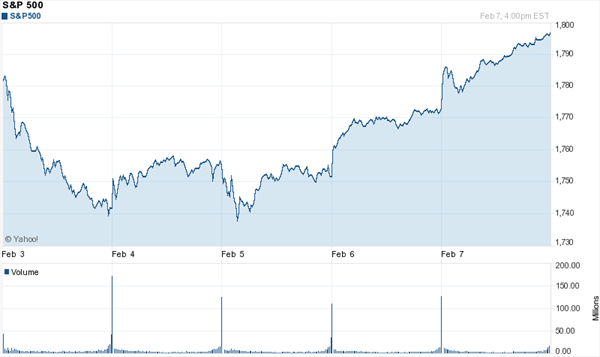 The old adage, “Don’t judge a book by its cover,” applied perfectly to the January employment report released last week. Despite expectations for 180,000 new jobs, the actual result revealed an underwhelming 113,000 people found employment last month. Investors were further confounded by the unemployment rate declining to 6.6 percent on a low new jobs number, all while the labor participation rate increased. However, another element of the report investors likely found attractive was the 48,000 new construction and 21,000 manufacturing jobs created. Gains in these two sectors typically signifies a healthy economy. Furthermore, the unemployment rate survey, which surveys about 60,000 actual households versus the 400,000 businesses surveyed in the payrolls report, showed the household measure of employment actually surged by 638,000 in January and has increased by 1.2 percent over the last three months making these last three months the strongest since 2000. 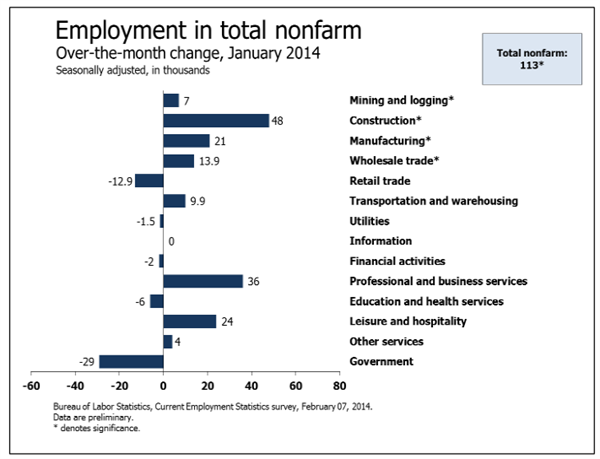 While the business media has chosen to focus their attention on emerging market woes and other issues this month, corporate earnings have seemingly garnered less of the spotlight than usual. According to Bloomberg, of the two-thirds of S&P 500 companies that have reported their latest quarterly results, 76 percent have topped profit estimates and 66 percent have exceeded revenue estimates. The data would further suggest that profits, on average, increased more than 8 percent in the final quarter of 2013. Bespoke Investment Group points out that out of all the 1,100+ companies that have reported earnings, 65 percent have beaten their earnings estimates. Bespoke went on to say if this trend were to continue, this would be the strongest earnings beat rate seen since the fourth quarter of 2010. 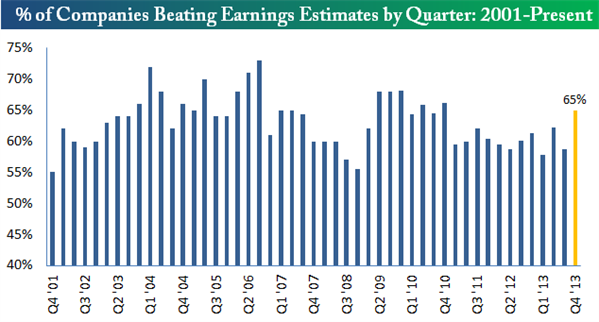 Here we go again. After the temporary suspension of the U.S. debt limit expired last week, Treasury Secretary Jacob Lew informed Congress he believes the U.S. will exhaust all remaining cash and run out of extraordinary measures to fund the government by February 27 of this year. The Bipartisan Policy Center echoed these same thoughts by estimating a range of time the U.S. government may run out of money to fund its obligations, as depicted below. While there doesn’t appear to be the same posturing in Washington as the last time we faced this deadline, we can never be sure what will happen until a final resolution is reached that ensures the debt ceiling is once again raised. Not many on Wall Street appear worried an actual default on U.S. debt will occur, but it’s worth nothing this time around the issue comes at an especially inconvenient part of the year. A high level of tax refunds are typically issued this month and Congress fittingly plans to be out of session from February 17-24. 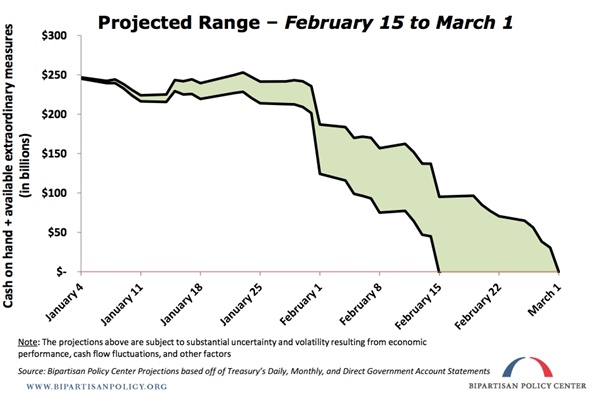