Blood on the Street 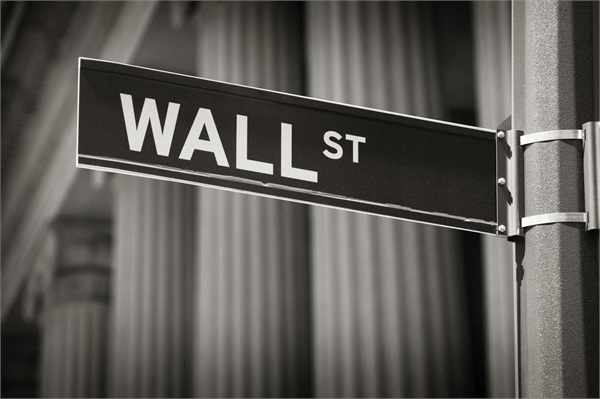 In what turned out to be the worst week for U.S. stocks in more than two years, the S&P 500 dipped 2.69 percent with the majority of the damage having taken place on Thursday. There doesn’t appear to be any sole catalyst for the decline, as investors were offered a plethora of reasons to turn negative. And while investors officially wiped away any year to date gains for the Dow Jones Industrial Average last week, the S&P 500 remains up 4.15 percent in 2014, and would still need to decline more than 6.5 percent from last Friday’s close to reach a “correction,” defined as a 10 percent decline from a previous high.

Thursday’s sell-off began in Europe, featuring one of Portugal’s largest financial institutions once again thieving headlines. Banco Espirito Santo saw its shares plummet more than 40 percent in one trading session, and more than 75 percent over the entire week, as they reported earnings that were worse than anticipated and will almost certainly result in the company needing to raise more capital in order to stay afloat. Investors are anxious that Europe’s economy is in danger of taking a turn the worse, and that the European Central Bank isn’t doing enough to support the continent’s feeble banking system. This has resulted in the increasing threat of bank failures in Europe sparking a global credit crisis. Further compounding these concerns is the worry of the effects fresh sanctions wagered against Russia will have on economic growth in upcoming quarters on an already weak European economy. 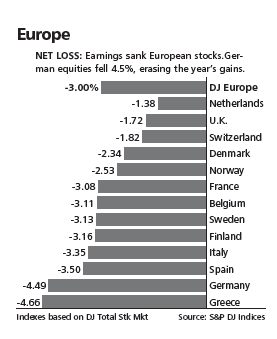 It’s time to brace ourselves. If last week is any indication, it appears that investors may be once again translating good news on the U.S. economy into bad news for U.S. equities, at least temporarily. Last week it was revealed that the U.S. economy advanced at a 4.0 percent annualized pace in the second quarter, according to the Commerce Department. This stronger than expected release reignited the debate on when the Federal Reserve should begin to raise interest rates. The majority of economists who commented last week stated it appears the days of record low interest rates may not last much longer, worrying some investors that as cheap credit and low investment hurdle rates for corporations fade away, it will have a negative impact on future earnings growth. However, Friday’s release of the July employment report helped fan these concerns as employers added a less than expected 209,000 new jobs last month and the unemployment rate ticked back up to 6.2 percent. Perhaps most importantly, wage gains were once again nearly non-existent. Average hourly earnings increased by only a single penny to $24.45, a marginal 2.0 percent gain from last year. Based on the lack of inflation, as measured by the Federal Reserve’s preferred metrics, in addition to the fact 3.2 million Americans, or nearly one-third of all those who are unemployed, have been out of work for more than six months, it wouldn’t appear that the Federal Reserve would take any drastic measures until improvements in the labor market are more robust and inflation is much more pronounced. 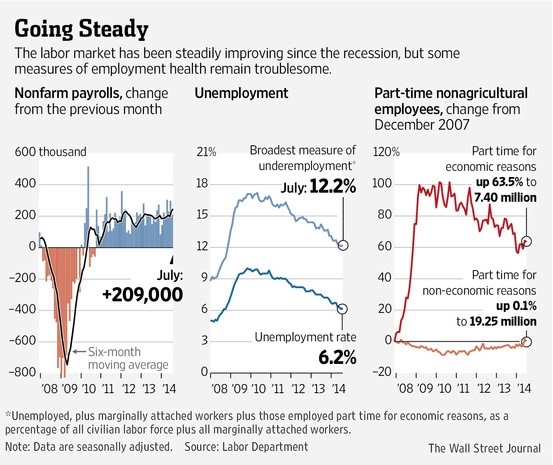 The Wall Street Journal provided some interesting statistics about the stock market’s recent sell off last week. The Dow Jones Industrial Average had its second worst day of the year on Thursday, breaking an impressive streak of 52 consecutive trading days without a decline of more than 1 percent. This was the longest such streak since November 2006 to February 2007, and was the seventh longest streak ever. Furthermore, the lack of volatility this summer has lulled many investors into such a comfortable state that despite Thursday’s drastic feel, it might be surprising for many to learn it wasn’t the worst day of the year for U.S. equities. In fact, the Dow Jones Industrial Average had a more severe decline in February of this year, and the S&P 500 has had two days in 2014 that featured more significant losses.