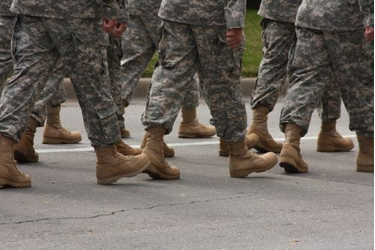 The markets once again set a new record high last Thursday, making it the 28th day this year that the S&P 500 closed at an all-time high. Investors cheered positive data on the U.S. housing market, while some of the most influential Central Bankers from around the globe made statements this week that ensured investors record low interest rates are in little danger of disappearing anytime in the immediate future. After last week, the S&P 500 has now advanced more than 7.5 percent in 2014, and finished last week precisely 20 percent higher than this time last year.

Central Bankers Give More of the Same

With interest rates at record lows, and nearly all of the developed economies still struggling to kick start their economy, ears were tuned into Jackson Hole, WY this week to catch the freshest insight from the world's most famous Central Bankers. While no new policies, or commitments to change existing policies, were issued, investors seemingly liked what they heard. European Central Bank leader Mario Draghi expressed a much needed reminder that his group stands ready to enact further policies should the Eurozone economy continue to falter. Furthermore, U.S. Federal Reserve Chair Janet Yellen remained noncommittal on the direction of interest rates here domestically. The debate on how soon interest rates should be raised is once again heating up as labor market conditions and other economic indicators point to much progress having been made in recent quarters, especially in the number of long term unemployed. However, given that there has been little sign of a sustainable uptick of inflation, particularly in private sector wages, there appears no urgency to raise rates sooner than the mid-2015 expectations that most experts have predicted, according to The Wall Street Journal. 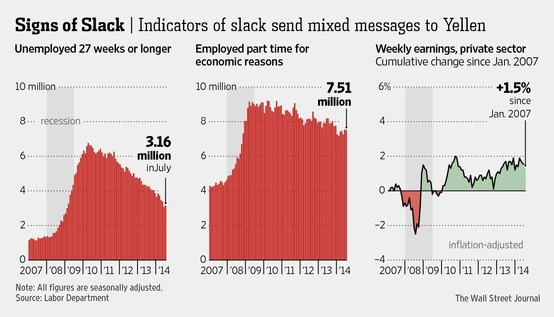 Data released last week on the U.S. housing market was spectacular, as existing home sales advanced at the strongest pace in nearly a year. While home sales increasing 2.4 percent is impressive on its own, the more promising statistics laid deeper in the weeds. First of all, the percentage of homes being sold out of foreclosure or short sales has dipped all the way to 9 percent, down from nearly 50 percent in 2009 and a far cry from the 20 percent of sales they represented in early 2013. Also, inventory increased 5.8 percent from last year to the highest level in almost two years, according to the National Association of Realtors. The increase in inventory is helping to keep housing prices in check and is a good sign that more homeowners are feeling confident enough to list their homes for sale. Average prices were up 5.8 percent in July from a year ago, down from July 2013's year over year increase of 13.1 percent, according to The Wall Street Journal. 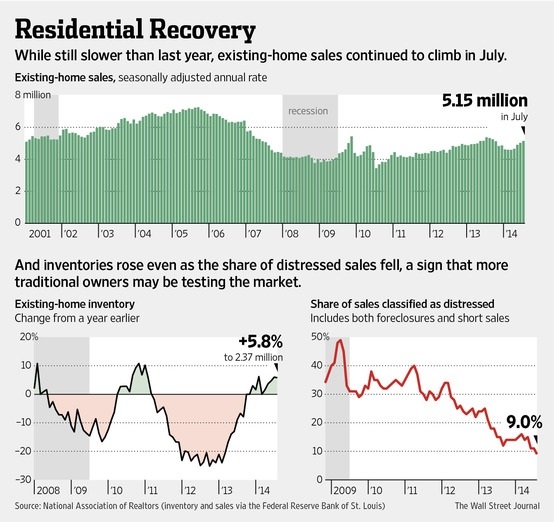 Our thoughts and prayers extend to all of those affected by the earthquake that struck Northern California last weekend. The quake was measured at 6.0, making it the largest and most damaging in 25 years. According to the U.S. Geological Survey, there is more than a 40 percent chance of severe aftershocks throughout the week. Although no deaths have been reported, an estimated $100 million worth of economic losses will occur as a result of the damaging natural disaster.