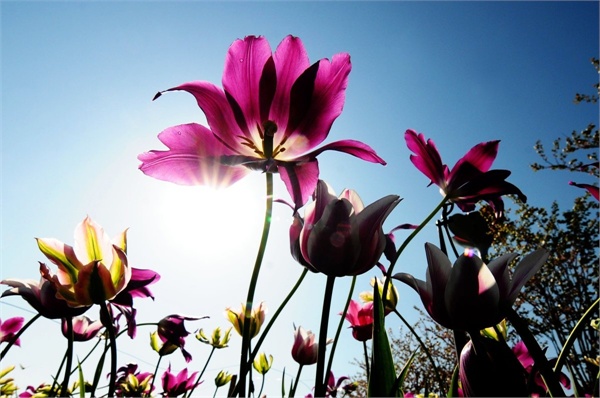 Once again, investors witnessed a swift shift in sentiment last week as investors barreled back into stocks. The S&P 500 gained nearly 50 points to finish the week at 1,864, or less than 2 percent from all-time highs. Last week was of course shortened due to the extended holiday weekend, but there were enough items that gave investors enough confidence to wade back into stocks. Mainly, corporate earnings season has begun, and with expectations already set very low, it’s not taking much for companies to once again exceed projections.

As we proceed into earnings season this week with the stock market near all-time highs, it’s interesting to note how the S&P 500 has performed relative to past bull markets. Our friends at LPL Financial last week pointed out that in fact, the earnings per share growth we’ve witnessed since the last time we set an all-time high has been the weakest cycle in 55 years, advancing at a pedestrian 2.8 percent annual rate. Furthermore, current expectations from FactSet tell us that if all S&P 500 companies reported earnings as expected, this would actually be the first time we’ve seen negative quarterly earnings growth since the third quarter or 2012. However, the flip side of having really low expectations is that they’re easier to beat. And that’s exactly what happened last week as several companies easily walked under their limbo bar that’s skyscraper high. 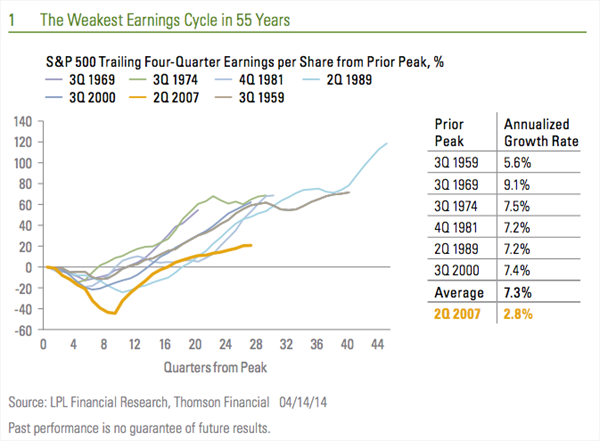 While the average company in the S&P 500 has had a rough time resuming growth, it’s important to understand that there has been a wide disparity among the strongest and weakest performers. This is creating an environment where statistics as a whole may indicate that all of corporate America is having trouble growing their business, while that’s actually not what’s happening. In fact, we seem to be in the midst of what’s called a “stock-picker’s market” where the skill and ability to separate winners from losers will be imperative in order to earn favorable returns in the stock market. Since the depths of the financial crisis in 2008 and 2009 until recently, stocks mostly moved in tandem. As stocks exhibited volatile behavior as a group, stock investing was a matter of identifying “risk-on” vs. “risk-off” behavior. According to CovergEx Group, the 10 industry sectors of the S&P 500 have averaged 85 percent correlation since 2009, while a more ordinary number would be around 50 percent, based on historical statistics. We seem to be moving back towards normality, as the last 30 days have shown correlations declining to 77.5, according to the Wall Street Journal. 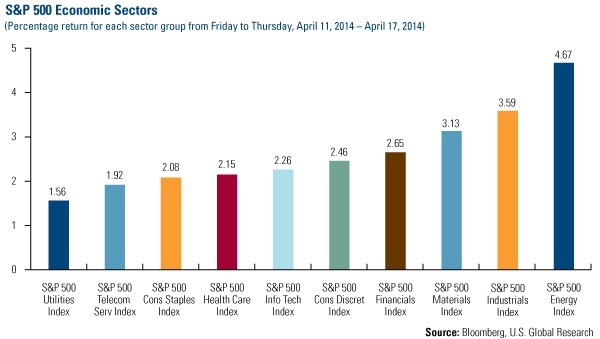 According to The Wall Street Journal, 83 percent of companies that launched an initial public offering (IPO) over the past three months weren’t profitable. This is just under the all-time high of 84 percent which was set during the peak of the now infamous technology bubble in the first quarter of 2000. Interestingly, whenever the percentage of companies going public with no profits has exceeded 70 percent, the S&P 500 has averaged a 4.2 percent decline over the following year. 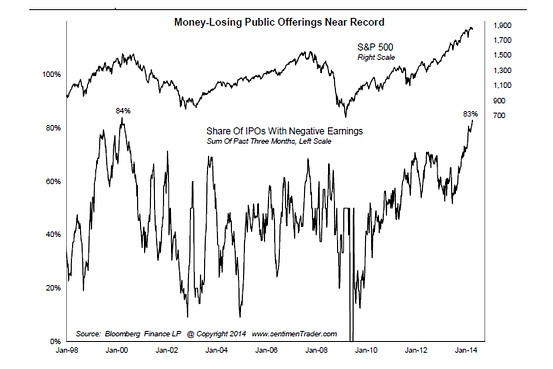