Major stock indexes rose for the second week in a row last week. The S&P 500 jumped 1.7%. The Dow Jones Industrial Average grew a similar amount. And, the Nasdaq Composite gained 2.2%. The markets pushed higher, back toward all-time highs, on the disappointing jobs report released on Good Friday. The lackluster labor report convinced market participants that interest rates will remain lower longer, placing us squarely back in a “bad news is good news” environment. This bad news also pushed gold prices higher. The most actively traded gold contracts (June delivery) gained 1.5% last week to $1,218 per troy ounce, their highest level since mid-February. Gold is up 6% over the past month since the Federal Reserve’s March meeting.

U.S. companies are continuing the trend of returning cash to shareholders in 2015. Cash returned to shareholders through dividends and share repurchases topped $900 billion in 2014, and so far this year it is on pace to top $1 trillion. Dividends have expanded approximately 14% each year since 2010, and a similar pace of growth is expected this year. The total dollar amount of dividends paid is estimated to be north of $400 billion. On top of this, Goldman Sachs expects more than $600 billion to be spent on share repurchases. 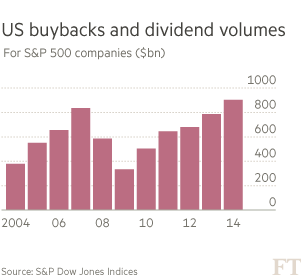 Contracts for oil delivery in May reached nearly $54 last week, a high for 2015. This caps off a 24% rise in future prices since hitting a six-year low in March. The rise comes from new evidence that domestic production is beginning to decline. According to the Energy Information Administration, domestic output reached a 42-year high in March and is expected to peak in April or May before declining through the summer months. The dramatic decline in rig count supports this prediction: the number of rigs drilling on U.S. soil has dropped 45% since January. Investors are betting that this will set the stage for some price stability in oil. However, we remind everyone that bottoming is usually a process that takes longer and involves more volatility than most expect. We wouldn’t be surprised to see another leg down before stabilizing and moving higher.

Greece Slipping Back Into Recession

The Greek economy appears to be slipping back into recession as the government continues negotiating a bailout with its foreign creditors. Roughly $500 million of obligations due to the IMF in early April have forced the government to juggle prior commitments by prioritizing cash for repayment and delaying payments to public sector businesses that supply the government. This is, in turn, hurting consumer and business confidence and putting pressure on the overall economy. The Greek government is expecting the economy to expand 1.4% for the year, but some economists think this is too optimistic. The ongoing health of the economy depends largely on Greece coming to terms with other members of the Euro zone and the IMF to keep meeting debt repayments. More than $2.5 billion of debt repayments are due during the second half of April. 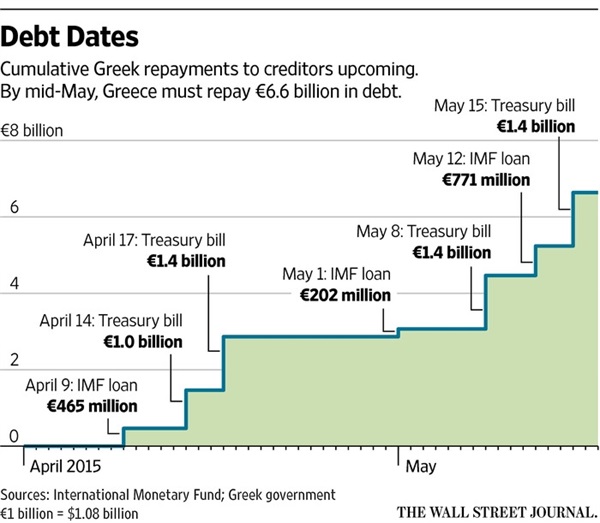 Are you looking for a new job? While the adage suggests the early bird gets the worm, data from a recent survey of 270,000 job postings by SmartRecruiters shows that job hunters might be better served by sleeping in on Monday and hitting the streets on Tuesday. According to the data, it turns out that Tuesday is the most popular day for all three critical steps in the process. Most job openings are posted, most candidates apply, and most new job offers are extended on a Tuesday. SmartRecruiters CEO suggests that Tuesday is probably the most popular day because hiring managers spend Monday catching up after the weekend and are ready to post new positions, schedule interviews, and extend offers by Tuesday. If you want even more of an advantage, SmartRecruiters suggests scouring the job boards and sending your resume around 11 am…on a Tuesday of course.